I recently had the privilege of hearing Alan Greenspan speak at George Washington University – as an aside, the best part about DC is the sheer number of universities, think tanks, and bookstores hosting interesting thinkers on a daily basis – and I was thoroughly impressed. I’m a big fan of Greenspan, and I think that a lot of people focus too heavily on his role in creating the financial crisis without giving him credit for an otherwise exceptionally effective career. Indeed, to reference my previous post, I can say with a high degree of confidence that Greenspan is one of the few people that I largely disagree with but still respect and admire. The impetus for his talk was the recent publication of a book he co-authored with Adrian Wooldridge, an Oxford historian and writer for The Economist. The book is an economic history of the United States, and it looks exceptionally interesting (my full review should be out sometime in late November, I suspect).

What really struck me about Greenspan was how sharp and witty he was, especially for a man in his nineties. His commentary on a whole range of economic questions was lucid and insightful, and I left the talk with lots of new information and questions. Some of his more interesting assertions included 1) that welfare spending is crowding out aggregate domestic savings, 2) most of American economic innovation can be explained by Schumpeterian creative destruction, 3) the Royal Navy’s attempt to end slavery was thwarted by the cotton gin, and 4) inequality is to some degree structurally inevitable due to the boundless growth of capital productivity and the hard ceiling on human intellectual growth. He also made some interesting arguments that were less doctrinaire than I would have expected. For example, he noted that the expansion of the state was probably inevitable and necessary, if not wholly positive, after the 1920s. He also admitted that American innovation and productivity growth was still extremely robust during the 60s and 70s, suggesting that certain critiques of “big government” are likely overstated or, at least, underspecified.

If you want to learn more about Greenspan, including his childhood, early work in economics and government, and time as Fed Chairman, I highly recommend Sebastian Mallaby’s The Man Who Knew: The Life and Times of Alan Greenspan. It is one of my favorite biographies and is, in the words of Greenspan himself, “tough but fair.”

If you want to read Greenspan and Wooldridge’s book, it is called Capitalism in America: A History. There is already an excellent review out in FT, and Kirkus characterizes it as “Not without biases, but a smart and engaging look at the workings of the economic machine under various regimes, isolationist and internationalist alike.” 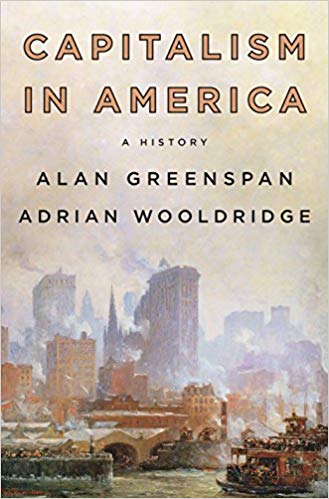 My Tweets
Follow Politics in Theory and Practice on WordPress.com